It’s been a long time coming, but I finally did it.

I fought Calamity Ganon. And let me tell you, it wasn’t nearly as scary as what I thought it was going to be.

Some screenshots include the battle against Ganon, and I will be talking about how I defeated him. If you don’t care for spoilers or have already played the game, then KEEP ON READING!

For the past year I did not want to go and fight Calamity Ganon. Basically, I didn’t want the story to end but I was also extremely scared to face him. He just seemed so creepy. And if he was anything like how the miniature versions of him were in the Divine Beasts,  then I was going to be even more freaked out.

A clear representation of my face before fighting Calamity Ganon:

What I didn’t know was, if you had completed the 4 Divine Beasts before going to Hyrule Castle to fight Ganon, HIS HEALTH BAR DROPS BY HALF! So that made it so much easier for me.

It was the easiest boss battle I have ever done. But little did I know there was more.

After fighting Calamity Ganon, there is a second battle. You are out in the Hyrule Field and are faced with the form of “Dark Beast Ganon”. Zelda gives you her Bow of Light and her horse to attack Ganon while she draws her power to help. This battle if done correctly is also quite easy and can be done very quickly. Nonetheless, I actually really enjoyed the boss battle and was no longer a little “scaredy-cat”. 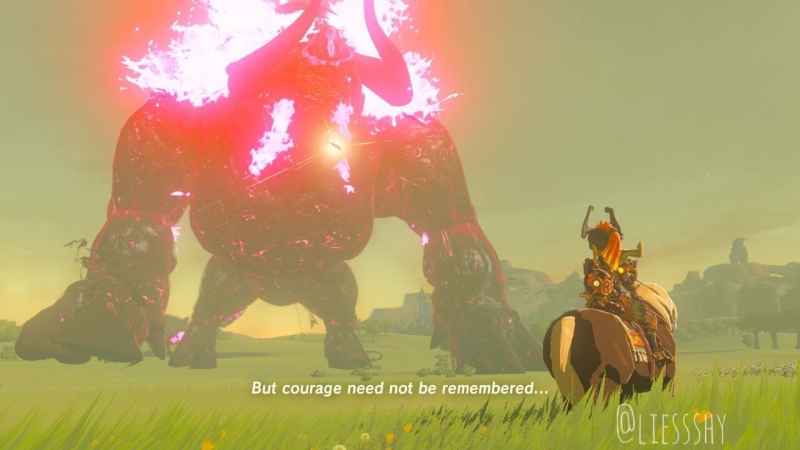 An advantage to me taking my sweet time fighting Ganon, I was able to prepare quite a bit. I had managed to get the Master Sword a long time ago, however due to my fear of going to the castle, I wasn’t able to get the Hyrule Shield. What I did get though, was strong ancient armour and weapons. The armour I had made from Guardian parts and the helmet was “Midna’s Helmet” – I got this from a quest in the DLC. Guardians frighten me too in this game, and knowing Hyrule Field and Castle was surrounded by them, I wanted to make sure Link was protected as much as possible – thank goodness for the Fairy Fountains and armour upgrades!

Alongside that, I cooked as many meals as I could be bothered cooking so I could quickly refill Link’s hearts during battle. Funnily enough, I barely needed any refilling as I was quite skilled in dodging attacks. Those “Major Test of Strength” Shrine challenges actually were useful for something…

I also made sure I had stocked up as much as possible on arrows, and made sure I had an efficient number of ancient arrows but due to not having enough parts, I only managed to make 10. However I did get a bonus 3 from using an amiibo.

Looking at Link holding the Master Sword without the Hyrule Shield depressed me, so before battle I made sure I found that shield and completed the “Tarrey Town” side quest so if my shield broke and I died, I could go and re-purchase it again. Looking below at this screenshot of Link in front of Calamity Ganon, holding the shield and sword makes me so happy, and I feel like Link is complete. 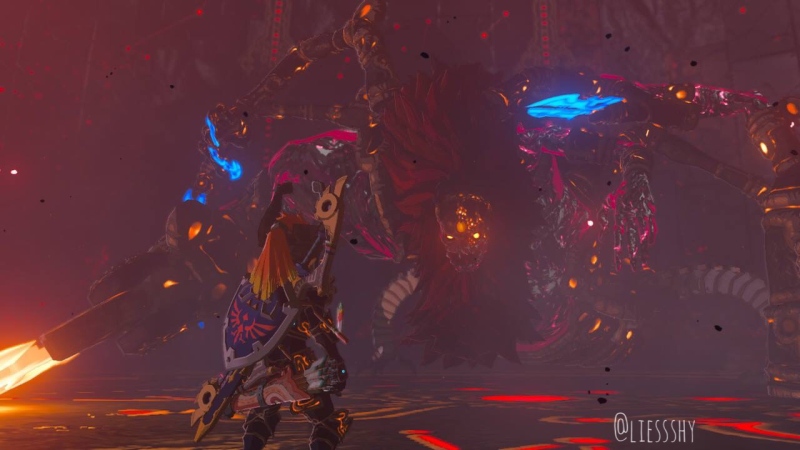 I felt like I had prepared myself the best I could, and so I went on my quest to kill this freaky monster.

Afterwards, seeing Zelda seal Ganon away forever (I doubt it) was utterly amazing. You see her use the power of the Triforce and the cut scene was great. No matter what or how, when Zelda’s face pops up in a cut scene, she always looks so radiant.

There is still so many side quests to complete in the game, so many shrines to locate and hundreds of Koroks to find! So thankfully, you can still continue to play. The game recognizes you have beaten Ganon, however if you load your saved file post game, it will be as if Ganon hasn’t been fought – I had to google why because my silly brain couldn’t work out that if Ganon was gone, the story wouldn’t really be playable again. Derpy Liessshy…

I will probably take some time away from this perfect game, but I will definitely come back to complete as many side quests as I can. For now, I will enjoy this view of a beautiful place called Hyrule.